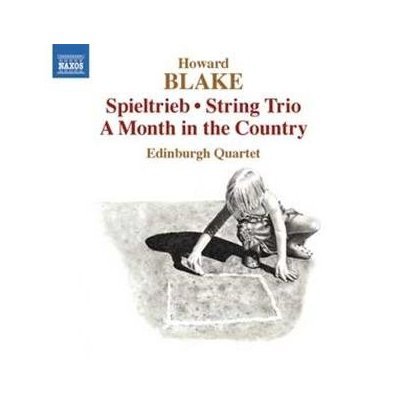 The String Trio of 1975 was composed shortly after the Piano Quartet and was requested by the three string players who had been involved in the creation of it: Jack Rothstein, Kenneth Essex and Peter Willison. The quartet broke up shortly after this however and although it was briefly read-through no performance was given.

Solstice, and the first of the Summer Season of chamber concerts which have now become a familiar feature of Brighton Philharmonic’s programme. Howard Blake is a very familiar figure as a result of his many film scores – to say nothing of The Snowman – but his other compositions are equally appealing. Though a recent injury to his wrist meant he was not able to play the piano parts himself he was present to introduce the music with a gentle humour which suited the occasion and the intimacy of the setting.

The short programme reflected a long-standing interest in the complexity of writing for chamber instruments, opening with a recent arrangement of Pennillion for cello and piano. Originally conceived for harp and piano, it has gone through a number of arrangements before arriving at the present one. The opening melody is intensely lyrical. Blake’s melodic gift is similar to that of Elgar or Tippett in that the melodies seem so inevitable that we can’t believe we have not known them all our lives and he is just recalling a tune we all know already. The work moves rapidly through a set of variations which allow the cellist, Peter Adams, to show his technical skill as well as his sensitivity towards the subtleties of the melody.

The following Fantasy Trio was being given its first performance though the original idea for the score goes back to his early school days. It is obviously difficult on a first hearing to judge how much is the work of the 17 year old and how much the mature composer, but the melodic ideas and the confidence of the work must have been part of the original spark and as such are a tribute to his genius from an early age. The part writing is exemplary, maintaining a balance between them which never allows one voice to dominate. The final Scherzando is more complex both in rhythm and harmonic density.

Howard Blake admitted that the String Trio is probably the most challenging form for him as it constantly misses the fourth note of the chord. The Trio dating from 1975 is a fierce work with a dark edge to it, strengthened by the deeper tones of viola and cello. The violin, Daniel Bhattacharya, takes the lead throughout though he is often challenged by the viola line from Bruce White.

The final piece was a recent extended single movement entitled Elegia Stravagante – a title suggested by a waiter as it is a reflective elegy which ends with unexpected enthusiasm. Though Howard Blake admitted there are strong auto-biographical elements within it, the piece moves rapidly as a whole with universal rather than personal impact. The seven sections are difficult to follow but the sense of achievement by the climax is persuasive.

As Howard Blake was not able to play the piano parts Sasha Grynyuk proved to be a more than ample substitute, bringing a fine mix of subtlety and bravura to his playing.

The next concert is on Sunday 5 July with music by Frank Bridge and Haydn.

The new season began brilliantly! Peter Adams, the Philharmonic’s popular principal cello, was the virtuoso backbone of four chamber works covering the entire span of Brighton-bred Blake’s distinguished career. From the re-worked teenage Fantasy-trio of 1956 to last year’s ‘Elegia Stravagante’, each work was full of glorious melody and rhythmic complexity. The composer’s amiable introductions and helpful programme notes illuminated these delightful works even more. Blake is still recovering from a broken wrist so the piano part was played, at just a few days’ notice, by the excellent Sacha Grynyuk. Daniel Bhattacharya (violin) and Bruce White (viola) completed the ensemble.

Thursday, August 11, 2011 Howard Blake's Vivid Music for String Quartet and String Trio, Nicely Performed by the Edinburgh Quartet
Howard Blake made me take notice years ago with his dazzling score to the children's cartoon The Snowman. I have finally had the chance to hear more of his work via a couple of Naxos releases, one covered earlier on my Gapplegate Music Review Blog, the other up for discussion today. What I hear I like.

The one at hand covers some of his music for string quartet (and one for string trio) (Naxos 8.572688). The Edinburgh Quartet do the honors and they provide a nice balance between lyric expression and subtle shadings of string color. In many ways that's what Howard Blake's string chamber music is about.

His music has a modern tang to it and a kind of linear narrative quality so that you would never think you are hearing a piece by, say, Schumann or Brahms. Yet there is a very lyrical melodic strain to his compositions that put him apart from what is the norm out there today. The pieces ["Spieltrieb," "A Month in the Country," "Leda and the Swan," "String Trio, Op. 199," and "Walking in the Air"] include some early work (1975, 1977) and some recent (2008-2010). All have a pretty ravishing memorability about them.

The CD ends with the "Walking in the Air" sequence of The Snowman Suite and it is lovely to hear, especially if you are already familiar with the boy soprano, piano and orchestra version from the cartoon soundtrack. What it loses in sheer sensual beauty it gains with the paired-back clarity of the quartet.

This certainly is not the sort of cutting-edge modernism that can be had out there. It is a wonderful example of music from a composer who will give you a warm, almost folksy kind of feeling. a little like Vaughan-Williams in his more homespun mode.

If that sounds interesting to you, check this one out by all means.