The original version for chorus and eight brass was given by The Bach Choir, rehearsed by Sir David Willcocks and first performed by them with London Brass conducted by Howard Blake in St. Paul’s Cathedral, 13 December 1990.

The first performance of this version for SATB and 5 Brass was given by Sussex Chorus conducted by Neil Jenkins in 2002. 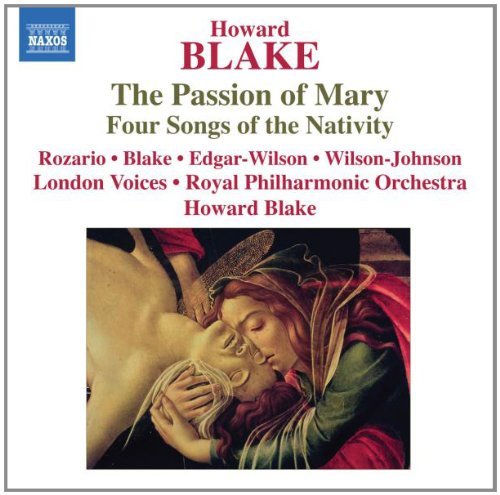 The Passion of Mary / Four Songs of The Nativity
Released: March 2010
Recorded: 12th August 2009
Artists: Patricia Rozario, Robert Blake, Richard Edgar-Wilson, David Wilson-Johnson, London Voices, Royal Philharmonic Orchestra conducted by Howard Blake.
Available from: Amazon UK Naxos Records
A first recording to be released in Spring 2010 by Naxos with London Voices and the brass of the RPO conducted by Howard Blake on a CD with the dramatic oratorio 'The Passion of Mary'.

The mediaeval joy in faith finds its best expression in lyrics on the Nativity and on the role of the Virgin Mary. The ideas of unique birth and everlasting triumph over death combine to remove all darkness, so that Hell is no more than a hazard which Our Lady helps us circumvent. Winter and long nights are forgotten in Her magical dance-song, and the Middle Ages' burning sense of Sin itself is lost in ecstatic rejoicing.

'*HOLY MARY, MOTHER MILD' op.238 (October 1976)
A late mediaeval poem of the nativity for tenor and piano (or string quartet), original version, later adapted as one of the 'Four Songs of the Nativity), see op.415

'*OF A ROSE IS ALL MY SONG' op.241 (December 1976)
A late mediaeval poem of the nativity for bass and piano (or string quartet) later adapted as one of the Four Songs of the Nativity, see op.415

'FOUR SONGS OF THE NATIVITY FOR TENOR AND PIANO' op.590 (March 2008)
an arrangement of the original version for SATB and 8 brass