News: 'THE SNOWMAN SYMPHONY'
You Are Here:-> Home :: Music :: Film & TV Scores :: EVA'S THEME FROM THE FILM THE LOST CONTINENT 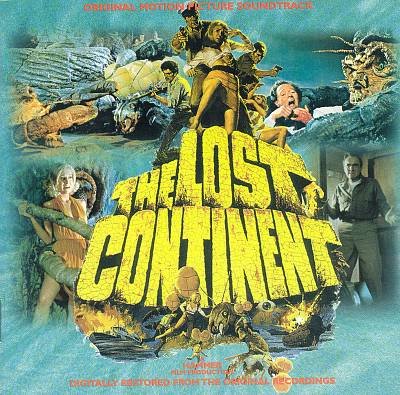 Tracks 24 and 25 are composed and played by Howard Blake on Hammond organ with rhythm section but not credited.

Composer's note: Main score for film composed by Gerard Schurmann, but I was commissioned to add instrumental sections derived from four notes from his score (in reels 3, 5, 6 and 9). How did this happen?

Phil Martell was musical director of Hammer music in 1968. He rang and explained that Gerard Schurmann had written a totally  'squeaky door' score, ie 12-tone non-melodic, which is what his 'stable' of serial composers were used for. But on this occasion there was a love interest in the film and GS was unable to provide anything suitable. Phil asked if I would visit GS in his Hampstead studio and examine the score with him for a possible tune that I could 'turn into something.' I went and did so. There was only one possible phrase in the whole huge score - the four notes b.c.a.b (in fact the same 4 notes that begin the standard 'Time on your hands'.) I said I could use these 4 notes and expand them into a theme for Hammond organ, bass and drums - Phil wanted that 'trendy' organ sound because he had introduced a song with organ and rhythm section backing. GS was very pleased to give me permission to use 'his' 4 notes and Phil was very pleased with what I both composed and played.

In 2000 32 years later GDI issued an album of LC which said 'GS's original orchestral cues for Eva and Lansen and Memories were revised for the completed film with the new rendition realised for a 'relaxed and jazzy Hammond organ combo.....incidentally the organ soloist is Howard Blake..'  He did not credit me with having written it - which I had (except for the first four notes, right-hand only)  GS had the nerve to call me from LA and accuse me of 'stealing his theme for Lost Continent'. To save a problem developing I told him that 'his 4 notes' were the same as 'Time on your hands' and this apparently concluded the matter.
'Eva's theme' for the Hammer feature film was written at the request of Phil Martell and composer Gerard Schurmann and composed, played and recorded by Howard Blake. Cast included Eric Porter, Hildegard Neff, Victor Madden, Nigel Stock and Suzanna Leigh.