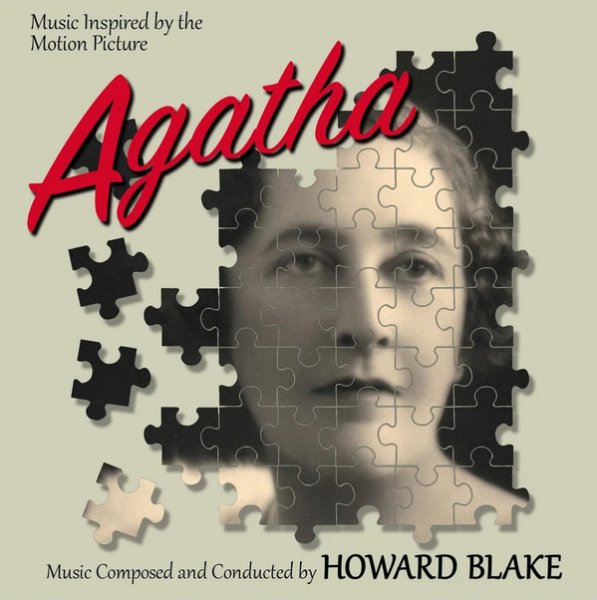 The film starred Dustin Hoffmann and Vanessa Redgrave and was directed by Michael Apted. It told the story of Agatha Christie's disappearance and eventual discovery in The Swan Hotel Harrogate, where the film was shot.

1979. Composer's note : ''I was taken on first as musical director for 'Agatha' and recorded a large amount of period music for dance band with arrangements which I scored myself, and for palm court trio in which I played piano, with Sid Sax violin and the great Reginald Kilbey cello. In the aftermath of what was a somewhat troubled shoot I was asked by David Puttnam and Michael Apted to compose and conduct a large-scale symphonic score in the tradition of Max Steiner, since for one reason the film was set in that period and for a second reason it was felt that a big score would add excitement and atmosphere.  I went ahead and scored and recorded the complete picture, completing the mix on May 5th 1978 at CTS Wembl;ey with John Richards as engineer.  However soon after the dubbing of the film was completed David rang me and announced that he had resigned from the picture. The incoming producer Jarvis Astaire decided to stage a preview of  the completed film at BAFTA, with a sample audience of 'staff from Selfridges'. The exit questionaire seemed to suggest that a large percentage liked the music rather more than the film generally and this made me uneasy. Also the music had been dubbed at  too high a level and was sounding over-prominent.  These and other factors resulted in Astaire scrapping the entire score of about 60 minutes of original music recorded for an over-50-piece orchestra. He contacted his Hollywood friend Johnny Mandel who wrote a much simpler score in a modern style to which was added a 1970s-style balled on the end titles. I happened to meet Johnny later that year at Glen Glen in LA and he said: 'You must be crazy writing a huge great orchestral score for a film like that!' I took it as a compliment.'

1995. Composer's note: Seventeen years later, Carl Davis very kindly asked me to resurrect a suite from it for a BBC concert series called Lost Scores" (see op.472), Losing this score had come as a great disappointment to me. It was a huge opportunity to compose a score, with Hoffman and Redgrave and photographer Vittoria Storaro and I was allowed a large Hollywood-style orchestra of which I took full advantage. Several suggestions have been made to resurrect the score and re-record, notably by Ford Thaxton and by Silva Screen, but it is difficult to arouse enthusiasm for a score that was not used!

2014. An interview with Mark Burman and Christopher Cook which led me to write to them the following day:

'I just watched and listened seriously to the whole DVD of Agatha-rescored
for the first time - at the time I was too disenchanted to bring myself to
do so.  What I realised is that the removal of my wall-to- wall score
virtually destroyed the film. David Puttnam was and is a very astute producer and
for him at the time it was a great coup to have landed Dustin Hoffmann, but he
realised during the shooting that the hoped-for magic between Vanessa Redgrave and
Hoffman didn't work. Redgrave seemed extraordinarily embarrassed by her part
and was quite unable to convince us that she was at all 'in love' with this
brash little American reporter.  In many shots they 'corpse' - the cardinal
sin of theatre when actors don't believe their roles. I think Puttnam
decided that the only way to possibly save the show was to treat it as if
the film had been shot in 1926, make it a sort of spoof of lush twenties
hotels and society - a bit like the treatment given to 'The Artist' in 2011,
but without the jokes and without the brilliance!

Micahael Apted cornered me late on into the cutting process and said: 'Would you be
able to write a really large, wall-to-wall atmospheric score in the style of
say Max Steiner at the beginning of sound (1929/30). The film is so weak
that we need some way of persuading the audience that this is Agatha
Christie and she is in severe trouble and preparing for suicide'.  This is
what I did and in fact at the one showing at BAFTA the sinister, menacing
music and the romantic music tinged with regret did somehow almost carry the
thing through. The producer who replaced Hoffmann decided that he would
stand by the performances, 'corpses' and all, and allow the audience to
delight in the acting without musical assistance. He would regard the film
as a strong contemporary drama. This was a mistake.  Johnny Mandel's sparse
moments of score were couched in the style of 1979 as was the obligatory hit
single made to grace the end credits in a staggering rejection of
authenticity.

A contemporary quote from Motion Picture Guide: 'There is no suspense, no
tension and not even one good scene in this preposterous and ostentatious
mess.'

On the whole I'm glad I didn't get a credit. HB

March 5th 2014 produced a new web comment on the Agatha score from editor Jim Clark's autobiography, Dream Repairman: 'Howard Blake had written an absolutely wonderful score for Agatha, which we recorded and mixed. It was very much in the Miklos Roza style and I thought it was great and so did Michael Apted. We ran the movie one night at BAFTA for an invited audience and , for some reason, Vanessa didn't like the music and she was instrumental in having First Artists dump Howard Blake's score and replace it with an American score by Johnny Mandel. It changed the nature of the movie because it became more sentimental.'