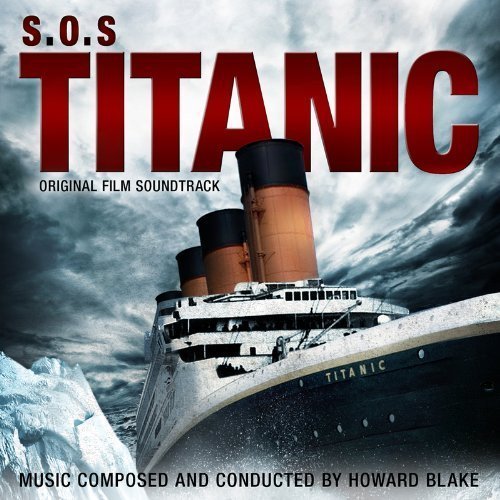 Composer's note: 'SOS Titanic is a good account of the disaster and well researched. We had a man who was an actual survivor on the team who I spoke to quite a bit. Producer Norman Gimbel was a practical joker and had an issue of Variety printed with the headline 'Howard Blake dies at age 95'. He didn't seem too concerned as to whether the film succeeded or not. I later found he was known as a lyric writer but he never mentioned it. He hired me on the strength of 'The Duellists' which I'd just written and because he was obliged to have so many English on the team because it was an Anglo-USA production. It was made by Bernard Delfont, brother of Lew Grade who was making 'The Raising of the Titanic' on the next lot. I liked the authentic B&W montage of the launching and that inspired my theme for the opening. Originally I wanted to write the score for large organ, suggesting the one in the Mormon Tabernacle, Salt Lake City, but Gimbel said no. I used horns and trombones with percussion, flute, oboe and a few strings and recorded in Denham Studios in London, flying back from LA for 5 days. The set of Titanic was a huge affair that could be moved up and down electrically. All other ship interiors were shot on the Queen Mary in Long Beach. The 1st class lounge was the dining room of the Waldorf in Aldwych. I used a Scott Joplin waltz (his only one, called 'Bethena') for the Irish lovers dancing on deck and wrote several more waltzes myself. The dance music played below decks when the lovers first meet was 'The Connemara Waltz.'

The Titanic. Probably only one other ship has inspired more music (the starship Enterprise, obviously), with the tragic tale of her voyage now a timeless legend. But while James Cameron's Titanic is the most famous, and A Night To Remember considered the best, there was another not half as well-remembered, one which used music to creatively tell the story of the doomed vessel and its passengers. Prepare to climb aboard S.O.S. Titanic. S.O.S. Titanic was a 1979 television movie with an impressive cast, including David Warner, Ian Holm, and Helen Mirren, and equally impressive production values. It's unfortunately been cast into shadow by other adaptations, a choice example being that this premiere release of Howard Blake's score is the first I've ever heard of the film. But if the album is reflective of the film, it's certainly worth tracking down. Now what we have on the album is an interesting mix of score and diegetic source music. Research tells me the film is known for its intriguing treatment of the disaster and the notion of class, with the story being told amidst the 1st, 2nd and 3rd class passenges. This is where the source music comes in, as the narrative movements between the trio are reflected by music, apparently "historically-correct". This gives ample opportunity for a diverse range of music, from the waltz from opera Eugene Onegin, a rendition of 'Rule Britannia', and traditional Irish music. You can see how the film would have benefitted from this method of storytelling, with the music being a shorthand for the characters and settings without needing to establish further. It also presents some fine arrangements of traditional material. The score itself is a fine work. It sets out its stall from the main title, a foreboding mix of thick brass and a solemn horn line which could easily be from one of the John Williams' classics such as The Poseidon Adventure or The Towering Inferno. The brass is quite prominent throughout the score, possibly representing the great ship itself. It certainly adds to the atmosphere, with a great deal of tension coming from that section. Of course this eventually gives way to a more emotional colour, such as the brief tragic motif in 'Abandon Ship', or the funereal sound of 'Desolation' (which reprises the line from the main title). Some of the music gets genuinely harrowing, such as the desperation of 'Survivors' or the power of 'The Hit', and while it's absolutely affecting, it never feels forced or cheap. S.O.S. Titanic is a fascinating album, presenting a unique musical interpretation of a tragic disaster. The way it moves through different genres is very creative, and the score is impressively impactful and reverential. Highly recommended. Copyright © 2013 Lost in The Multiplex. All Rights Reserved.

With all this hysteria about Raise the Titanic, maybe, just maybe, someone
out there has seen/heard Howard Blake's sad,melancholic score to S.O.S.
TITANIC (1979) ? !

I disliked Horner's "work" on TITANIC; enjoyed Barry's RAISE THE TITANIC,
marveled at Alwyn's economic, yet apt score to A NIGHT TO REMEMBER,
however ,it is Blake's magnificent music that perhaps sums up the mood
of imposing doom and despair that I feel is the greatest of all TITANIC
scores.

Obviously not being recorded seperately from the TV film has not helped
matters,
however ,I urge interested parties to rent the film from their local video
shop.