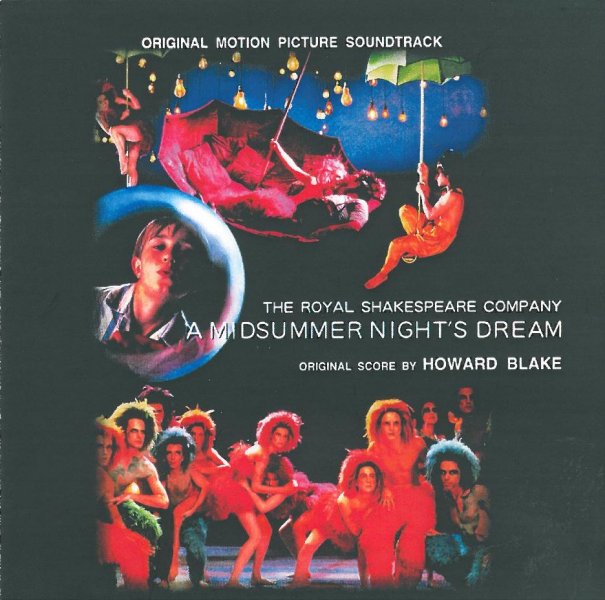 'Fairy song' was replaced by the Benedictus from the Festival Mass

In 1996, artistic director Adrian Noble filmed his RSC stage production of A Midsummer Night's Dream. The concept is nothing if not stylized, utilizing Anthony Ward's primary color costumes and minimal scenic design, and the inventive lighting of Chris Parry. This time, the concept is the dream of a young boy who roams throughout the production witnessing the events. What may have appeared full of magic and mirth onstage is poorly suited to film.

Not so Howard Blake's score. Expanded from the stage production, the music contains a lushness that makes up for the spartan look of the film. It also employs a childlike simplicity and wonderment that perfectly suits a young boy's dream.

An attractive violin solo sings of love in the air, later sung by a mournful, wise viola during the "I know a bank" soliloquy. The entire orchestra joins in for a joyful rendition during the flight to fairyland. Umbrellas play a large role in the staging and solo woodwind triplets ascend into the heavens accompanied by pizzicato strings as the umbrellas take flight. Female voices seduce the ear, from a plaintive alto mermaid voice to the beautiful female trio waltzing through "Philomel with melody." A jaunty trumpet and oboe with slide trombone (which later bays with Nick Bottom's ass' head) accompanies the merry band of actors. A gentle string trio underscores the party and later provides a
tender backdrop for Bottom's final speech.

Blake's score captures more of the magic of Shakespeare's text than the awkward production. If you can
find a copy of the long-out-of-print import CD, it's definitely worth a listen.

'*FESTIVAL MASS (for a cappella double choir)' op.377 (April 1987) (Audio Sample Available)
An eight-part a cappella setting of the mass in Latin for SSAATTBB. Commissioned for the Three Choirs Festival