Walking in the Air is available singly as a booklet  from https://www.highbridgemusic.co.uk/onlinestore (or by enquiry from anna@annamenzies.com).

It is also one of the pieces in 'Lifeycle' a collection of 24 piano pieces by Howard Blake which is available for sale complete as a book, by enquiry to anna@annamenzies.com

All sheet music for "The Snowman" and "Walking In The Air" since 2010 is published and available from Chester Music Ltd, part of The Music Sales Group, www.chesternovello.com It can be purchased online from MusicRoom.com, or from music retailers.

1. Recorded by William Chen as one of the items on 'Lifecycle' ABC Classics. Available from Amazon

2. Recorded as one of the works on the album 'WALKING IN THE AIR - THE MUSIC OF HOWARD BLAKE' performed by VLADIMIR ASHKENAZY and released on March 3rd 2014 on Decca Classics 478 6300 www.deccaclassics.com  www,vladimirashkenazy.com

In C# major, composed in 1982 in Kensington.  Published 1996 as Number 21 of 'Lifecycle'. This is a concert arrangement of the much-loved theme from 'The Snowman' transposed here into C# minor for Grade 6 - 7 piano players. An easier version is available in D minor at https://www.highbridgemusic.co.uk/onlinestore

Walking in the Air: VLADIMIR ASHKENAZY PLAYS THE PIANO MUSIC OF HOWARD BLAKE

Walking in the Air - The Music of Howard Blake: Vladimir Ashkenazy 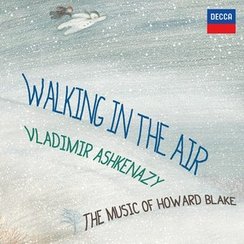 A tuneful and enjoyable collection from two masters. Album of the Weekend, 12-13 April 2014.

The great pianist and conductor Vladimir Ashkenazy has been friends with the composer Howard Blake - best known for The Snowman soundtrack - for many years.

On this unique and maybe unexpected album, there are no fewer than nine world premiere recordings including Blake's music from Ridley Scott’s film The Duellists  and a prelude written especially for Ashkenazy, made out of his initials.

Not surprisingly, 'Walking in the Air' is a stand-out track on this generous 80-minute collection.