DIVERSIONS - Works by Howard Blake for cello and piano (CD) 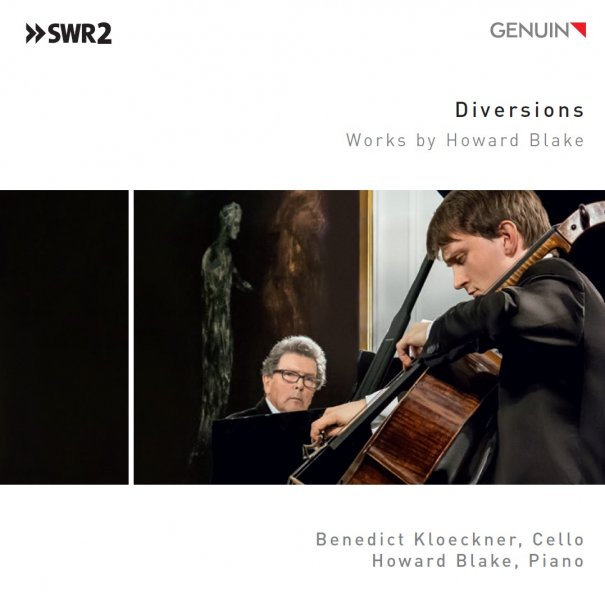 Diversions Works by Howard Blake (*1938) - Released March 2015 Benedict Kloeckner, Cello Howard Blake, Piano 01-08 Diversions for Cello & Piano, Op. 337a* (23:15) 09 Pennillion for Cello & Piano, Op. 525a* (08:49) 10-12 Cello Sonata, Op. 619* (23:31) 13 The Enchantment of Venus, Op. 566a* (08:07) 14 Walking in the Air (from The Snowman, Op. 620a*) (03:54) 15 Archangels Lullaby, Op. 436a (02:01) * World premiere recordings of arrangements RECORDED IN THE STUDIOS OF SWDR KAISERSLAUTERN GERMANY 12-14 JULY 2013 and 27-28 2104 Executive producer Sabine Wallenstein; Tonmeister Ralf Kolbinger; Balance engineer Rainer Neumann. Total Time (70:04) REVIEW: DIVERSIONS Published in: Das Orchester November 2015, page 85. On this CD ‘Diversions’ the composer Howard Blake (1938) joins up with Benedict Kloeckner (1989) the rising star of the cello world to present a programme of his own compositions. When Kloeckner won the New Talent Competition of the European Broadcasting Union in 2010 with Blake’s suite ‘Diversions’, the composer presented him with the Cello Sonata and the opportunity of being first to perform it. This led to the two musicians joining up in a close working relationship which has produced a wonderful-sounding album in which the rhythmic finesse of film music and elements of jazz combine to delight the ear. The British pianist, conductor and composer Howard Blake has written soundtracks for famous films as well as numerous concert works and is thus able to exhibit an extensive and multi-faceted oeuvre. One of his most famous pieces is the song ‘Walking in the Air’ from the film ‘The Snowman’, which is to be heard on this CD. Another famous credit is his soundtrack for the science-fiction film ‘Flash Gordon’ on which he worked together with the British rock band ‘Queen’. Throughout the album one can hear that Howard Blake is at home in the film metier in his compositions. They are colourfully laid out and tell stories. Striking melodies, rhythmic complexity, virtuosically-constructed passages and strongly-expressive harmonies determine their character. Some of the pieces heard on the CD were originally written for other combinations and therefore it is as transcriptions that they should be credited as world first performances. The work providing the album-title, ‘Diversions’, is an eight-movement suite which plays with contrasts. It takes historical forms such as the Prelude or the Sarabande, but dresses them up them in contemporary clothes, using jazzy and rhythmically-pointed musical elements. During the variation-work ‘Pennillion’ its longing, cantabile melody is allowed to shine in ever-changing new lights; the Cello Sonata is most unusual in its voicings. Later we come to the programme-piece ‘The Enchantment of Venus’, for whose story Blake is served by Greek myth. The farewell exhibits two short melodic pieces, ‘Walking in the Air’ and ‘Archangel’s Lullaby’ , originally written for three cellos. Howard Blake and Benedict Kloeckner convince on this high-quality album by their clearly-heard joy in the music. The outstanding quality and the beauty of sound is maintained throughout the works and their very different characters. Blake’s compositions with their catchy melodies must surely appeal not only to film-music buffs but to everybody who opens their ears! Anna Catharina Nimczik Arranged by DAS ORCHESTER NOVEMBER 2015

The English composer Howard Blake is a living legend with soundtracks like "With Umbrella, Charm and Bowler" or the Academy Award winning "Snowman". That such a musician invites someone to make music is probably quite unlikely. That he then also places a new work on the music stand for a premiere recording is almost a miracle. Benedict Kloeckner proves that he is worthy of such an honor: the rising star of the cello scene literally merges together with the grand master himself at the piano to become one on this new GENUIN CD: the whole variety of Blake's oeuvre, his rhythmic finesse and his humor lights up in thousands of colors. A must for chamber music and film music fans!