News: CELLO AND PIANO CONCERT IN COBLENZ 27 November 2022
You Are Here:-> Home :: Recordings :: Concerto for Piano and Orchestra; Diversions for Cello and Orchestra; Toccata 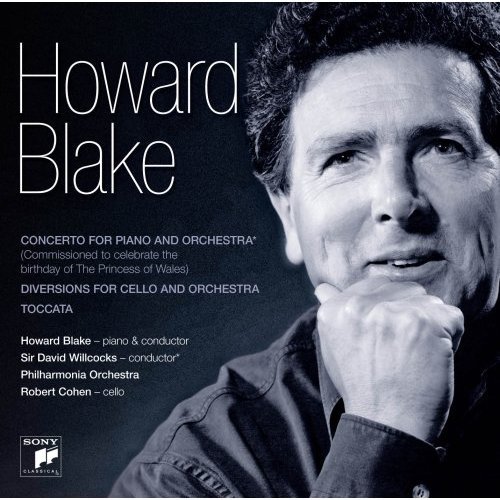 Originally released to coincide with the premiere performance in the Royal Festival Hall played by the composer with The Philharmonia, May 1991.

Howard Blake's Concerto for Piano and Orchestra was commissioned by the Philharmonia Orchestra in 1991 to celebrate the 30th birthday of Diana, Princess of Wales. It was given its premiere by the orchestra, conducted by David Willcocks, with the composer playing the piano part. The work had been recorded by Sony prior to this performance and this recording was reissued by Sony in 2008.

It is a substantial work lasting over 26 minutes and cast, as you might expect from Blake, in traditional form. Blake's career as a composer has been spent mediating between the traditional and more contemporary elements in the 20th century classical style.

The opening movement starts with an evocative and wistful Lento, a movement to which you might give the adjective filmic. Blake's concert music is fascinating for the way he does not turn his back on his film music but absorbs it and develops it. The music then gathers momentum, and the solo piano part become more strenuous as the Allegro bursts onto the scene.  The writing is tonal, but complex and requires something from the listener. The piano writing is quite strenuous, but the soloist is rather part of the texture in the baroque or classical manner, rather then in combat with the orchestra in the Romantic tradition.
A hushed orchestra introduces a slow, evocative piano in the Andante espressivo. The movement develops with piano running passages through the orchestra texture, which culminates into a rather wonderful, big romantic moment  The final Vivace wonderfully perky with the busy piano part loudly interrupted by the orchestra, and some lovely jazzy moments.

When I interviewed Howard Blake, he talked about how he had to re-learn his piano technique to play the piano part. The results are impressive and confidently fluent. It is piano writing which is probably difficult, but not always showy and Blake shows himself a sympathetic soloist, finely supported by Willcocks and the Philharmonia Orchestra.

The companion works to the concerto are two more of Blake's large scale orchestral works. His Diversions for Cello and Orchestra were written in their final form in 1985, with the cello part edited by the cellist Maurice Gendron. It started out life as a set of pieces for cello and piano, but the involvement of Gendron led to a considerable expansion of the piece with a commensurate increase in the virtuoso bravura of the solo cello part. Blake has recently started playing this bravura version with cello and piano and plans to record it with cellist ????

This recording of the orchestral version was made with Blake conducting the Philharmonia Orchestra, with cellist Robert Cohen as the soloist. The work is a sequence of relatively short movements which hark back to the suites of the past. The opening Prelude is melancholy, with the cello singing in the alto register at first unaccompanied and then with just high strings. A perkily busy not quite Scherzo leads to a melancholic, rather dramatic March. The rather busy Waltz has some rather skittish, skittery playing. The Aria is the longest movement, it is slow and dark, with a sense of sustained intensity. Serenade is a rhythmic and melodic dance, and here the solo cello part starts to get rather busy indeed.  The Sarabande and Cadenza provides the solo cellist with some wonderful virtuoso display moments, with quite a spare and dark accompaniement from the orchestra. The Finale is fast and furious with a wonderfully bravura end.

Blake's Diversions is a terrific work which combines an element of bravura with just the right element of fun and Robert Cohen is suitably dazzling in the solo part.

The final work on the disc,Toccata (A celebration of the Orchestra) was commissioned by the Royal Philharmonic Orchestra for the 30th birthday season (1976/77). The version performed on the disc was revised by Blake in 1988/1990. The work is a large and complex piece designed to show of the orchestra, but allied to a quite sophisticated structural imagination. All based on an 84 bar theme, Blake plays imaginative games in the way he shows off the orchestra and demonstrates his ingenuity. The joy of the piece is that none of this really matters, as when you listen you are carried away. The first section of the work displays the various sections of the orchestra, with the music having a quiet sense of steady overall progression. Blake uses a lively imagination in the way he gives each section of its orchestra its moment. And then the piece concludes with a wonderful jazzy fugue.

None of the works on this disc is well known, and the disc itself is slightly tricky to obtain. But I rather like Blake's imaginative re-working of contemporary style. The music here doesn't seek to re-define or push boundaries, instead it builds intelligently what has gone before. The results are neither simple nor simplistic and fascinating in their combination of wit and complexity.

Elsewhere on this blog: