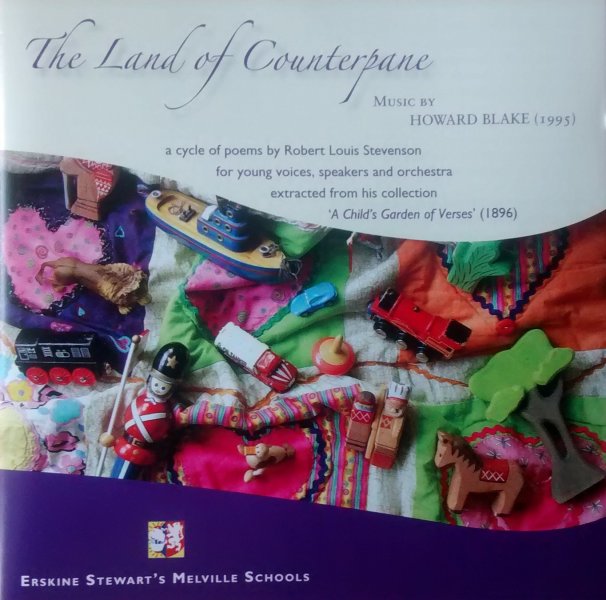 The Land of Counterpane
Released: 2007
Recorded: 25th March 2007
Artists: The Choir of The Mary Erskine School and The Scottish Chamber Orchestra conducted by Howard Blake. With David Rentoul (speaker)
Available from: Highbridge Music

The role of Robert Louis Stephenson as a man should be spoken by a male narrator and as a boy by a boy of about 8.

Number 22 of the collection 'Lifecycle' is a piano transcription of the song 'Night and Day'.

[The work is considered by Blake among his best compositions. It was commissioned by the Mary Erskine School, Edinburgh for their tri-centenary. An animated film was later planned to accompany the music, a script was written and Pat Gavin produced drawings but then The Scottish Film Board pulled out and BBC2 and BBC Enterprises followed them. To be performed 24th March 2007 by the Mary Erskine Choir & Scottish Chamber Orchestra, conducted by the composer at the Usher Hall, Edinburgh, during which a recording will be made. ‘A CD will initially be made available through the Edinburgh school [Erskine Stewart’s Melville Schools], but all parties hope it will eventually find its way into full commercial distribution. It is to be launched in September [2007], when the same forces give another live performance to mark the opening of the school’s new £3.5 million Performing Arts Centre.’]

They were also in the unfortunate position of following pupils from the Erskine Stewart's Melville Schools who impressed with their incredibly crisp and precise articulation of Howard Blake's The Land of Counterpane.

Based on texts from Robert Louis Stevenson's A Child's Garden of Verses, these catchy songs were well-suited to children's voices.