Sheet Music Available
The score is presently unpublished but the manuscript score is with Highbridge Music and a photocopies could be made available on demand. 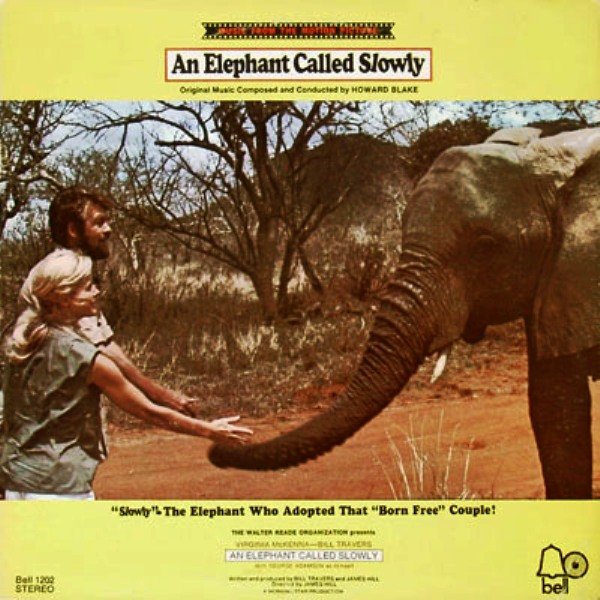 A note by the composer (from a letter to M. Chazam, Bruxelles, March 2017)

'I wasn’t exactly a baby when I wrote Elephant, but was quite young to be musical director at Elstree at 28. In 1967 Laurie Johnson stepped down from composing/conducting the ‘The Avengers’ and on the recommendation of Bernard Herrmann asked me to take over.  I was familiar with the music because I had played keyboard on the series for a couple of years. One of the series’ directors was James Hill, famous for ‘Born Free’.  ‘Elephant’ was supposed to be his sequel to ‘Born Free’ but somehow a baby elephant didn’t work quite the same as a baby lion and I suspect James was not too interested in the project. Instead of hiring John Barry who had scored ‘Born Free’, James initially tried to give pace to the film by overlaying cheery tracks from a  Bert Kaempfaert album – ‘Swingin’ Safari’ etc.,  but having assembled the film it was clear that it needed a great deal more music to make the action sequences come to life. Since I had succesfully taken over from Laurie Johnson and James urgently needed a composer he risked asking me to compose a new original score.
The ‘featured music’ was to be Bert Kaempfert and it was suggested that for my score I should somehow similarly incorporate a rhythm section, guitars and maybe ‘big band’ elements. In 1969 I had just finished the last ‘Avengers’ score and for this I had had at my disposal an absolutely top-notch big band with stars like Kenny Baker trpt, Don Lusher trb Ronnie Verrall drums etc. I admired the big band work of Quincy Jones and Henry Mancini at that time and was privileged to have worked with them on occasion (on 'McKenna's Gold' and ‘The Italian Job’ with Quincy, and on ‘Victor/Victoria’ with Hank.) They I think were somewhat more of an influence on me than Bert Kaempfert.  So the score I decided to write was indeed for big band-plus: 3 trpts, 3 trb. 5 saxes doubling woodwind, (which added oboe, flutes, cor anglais, clarinets) plus drums, percussion (including vibes, marimba, xylo etc) and an additional separate authentic African drummer (found in North London), harp (David Snell), rhythm guitar and electric bass guitar (Herbie Flowers). Quite a line-up! A critic commented:
“Composer Howard Blake scored the follow-up movie to "Born Free" in a completely oddball funk fashion. A great, almost tongue-in-cheek album with a big band Disney-style sound in places, don't miss the excellent slowburn break-beat instrumental "Elephant Rides Again".
When the film came out I was barely credited since the focus was on the use of Bert Kaempfert. No record companies in UK were interested in the music and maybe the producers found it a bit too prominent for what they had intended.  For this reason to this day IMDB etc credit the score as Bert Kaempfert (with additional music by Howard Blake.)
It was therefore much to my surprise that I was telephoned a while later by the director of Bell Records New York who asked if he could make an album, saying he considered it an ‘absolutely top-rate film score’.
Last year Elephant curiously came back into focus when I had some interest in the score from a big band in Surrey and knocked up a big-band concert suite derived from the score. An ad hoc performance was given without rehearsal in Loxwood Jazz Club, but I have since withdrawn it. The big-band-only version without the African percussion and without the great star instrumentalists of the sixties is a pale shadow of the original and it would be difficult now to do a live performance reflecting the brilliant playing of the existing vinyl album.'

Howard Blake's score for the now-forgotten sequel to the hit nature drama Born Free remains one of the great undiscovered soundtracks of the 1970s. A collection of breezy yet funky instrumentals, its mood and approach may seem ill-suited for a family film set in the African jungle, but An Elephant Called Slowly Bias works because its positive energy radiates the warmth and affection so central to the onscreen experience. Blake's nimble, expressive guitar is beautifully complemented by the rolling basslines and jazz-inspired drums, creating feel-good music that's neither dumbed-down nor saccharine. Fans of blaxploitation soundtracks are particularly encouraged to seek this one out.

SOME WILL SOME WON'T, AN ELEPHANT CALLED SLOWLY (1969)