Dramatic oratorio for tenor soloist, speaker,SATB chorus, solo viola and orchestra [first performance version, not publicly available] To listen to an excerpt refer to opus 282.
Published by: Highbridge Music Limited
Commissioned by: The Ditchling Choral Society with funds provided by the Vaughan Williams Trust
Instrumentation: Solo tenor, male speaker (St. Benedict), SATB chorus, semi-chorus, trebles (optional), solo viola. (NB the viola part is demanding and best played by a soloist separate from the orchestra. In a cathedral performance the Prelude to part 1 should be performed from the west end, the back of the nave, the Introduction to Part 2 from the central chancel screen crossing, and the Epilogue from the ambulatory behind the altar, the idea being to convey the progress of the novice.)
Orchestra: 2(=picc).1.ca.0.2 - 2220 - perc(2): timp/t.bell/xyl/2 susp.cym/cyms/glsp/SD/mar/tgl/tam-t; pno (=cel); organ (opt.); harp; strings
[Key to Abbreviations]
Note on Lyrics: Text and music by Howard Blake based on "The Rule of St Benedict" and "The Hound of Heaven" by Francis Thompson
Duration: 65 mins
First Performance: The first performance of the unrevised version of 'Benedictus' took place in the Benedictine monastic church of Worth Abbey, Sussex, in 1980 and was semi-staged, with the participation of the resident monks of the order and acting roles for the Novice (the tenor Richard Lewis) and the ghost of Saint Benedict (a speaker, whose live shadow was projected in silhouette on the high wall of the ambulatory, played by Christopher Geer). The chorus was The Ditchling Choral Society, the orchestra was The National Philharmonic Orchestra and the solo viola player Frederick Riddle. A dramatic filming of this first performance was enthusiastically proposed by the internationally-famous music-film producer Tony Palmer but did not happen due to the refusal of Ditchling Choral Society's management committee to allow it. Due to this turn of events the staged concept dropped from view and by the time the composer created the revised version of 1986 for performance in Saint Alban's Cathedral had been dropped completely. There have been a great many performances of 'Benedictus as a 'dramatic oratorio', (ie. a concert work) but the stage version has never so far (2009) been re-adopted. 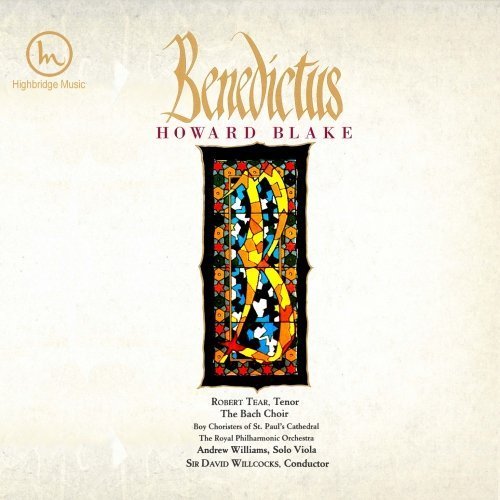 '*BENEDICTUS' op.282 (May 1980) (Audio Sample Available)
Dramatic oratorio for tenor, speaker, chorus, solo viola and orchestra commissioned by Victor Farwell, Abbot of Worth, for the 1500th anniversary of St. Benedict of Nursia b.480 AD