(revised edition) Dame Thea King had commissioned the concerto and performed the premiere and recording with the ECO. She was delighted with it as written, but Martin Kingsbury, publishing director of Faber Music, insisted that it should be much more 'showy' and I had to rescore the solo part. Not surprisingly Thea was extremely upset and sadly refused to ever play it again.
Published by: Highbridge Music
Instrumentation: 1fl.,2ob.,solo clarinet, 2bsn.,2hn.,strings 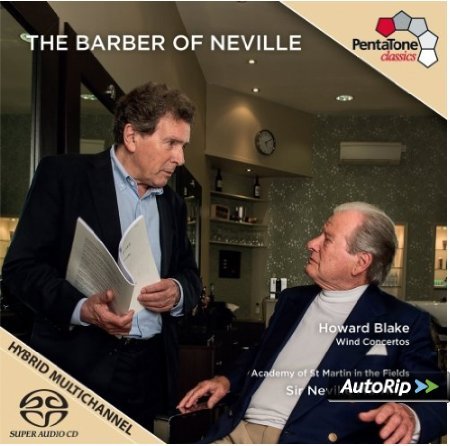 Almost all of the pieces listed above are being heard on records for the first time; the Clarinet Concerto, in which Sir Neville Marriner’s son Andrew (principal clarinet of the London Symphony) is soloist, is being recorded for the first time in the revised edition. Howard Blake, an Englishman who is now 75 years old, is much like his late American counterpart Alec Wilder in that he sees little if any distinction between “popular” and “serious” music---for want of better nomenclature. His style is lyrical above all, and his professional and contrapuntal grounding sets him apart from mere tunesmiths. He can write memorable melodies and he knows how to shape them and how to orchestrate them---in the marvelously compact first movement of the Flute Concerto, for instance, the melodic line is briefly traded off with the ‘cello. The Scherzo (second movement) is superb idiomatic flute writing, with deft handling of the strings. The slow movement is a deeply felt Andante espressivo, a piece that seems to be all about the flute’s middle register and the warmth of the lower strings. The finale is a march marked Grazioso. Jaime Martin is a marvelous artist who plays expressively, securely and without affectation.

The Clarinet Concerto in particular shows Blake as a truly great composer, and Andrew Marriner as a great clarinetist. This is not to draw attention away from the other exceptional soloists on this disc, but in this performance a meeting of minds between composer and performer seems to be taking place. The three movements are entitled Invocation, Ceremony and Round Dance. The first begins with the clarinet alone, taking the lead in a rather dark-hued recitative, including some real virtuoso writing. The Allegro section of Invocation has a wonderful contrapuntal fabric and juxtaposition of musical ideas and occasional close harmony with the clarinet in its chalumeau register and the lower strings. The first movement leads without a break into the second, with a single clarinet note providing the bridge. Ceremony is a study in intense, impassioned lyricism; it all seems to bloom from the sound of the clarinet. Toward the end, there is an exquisite trio with the two oboes in the orchestra and the clarinet. The final Round Dance is quintessentially English.

The Bassoon Concerto, in which soloist Gustavo Nuñez is in wonderful form, is the only one of the three concertos presented here that has an extensive cadenza----in the last movement. It begins with a march-like first movement, in which’s Blake’s lyrical spirit soon takes over. The whole concerto is an ingenious adaptation of the stile gallant to today. Indeed, all of these concertos are written for a Haydn-sized orchestra, more or less, without percussion. Two of them are scored for a string group, but one has the sense that Blake is using strings as a total orchestra, not just as several choirs of one species of musical instrument. It is the newest work on the album, having been completed just four years ago.

The Serenade for Wind Octet seems to be dominated by a personalized chorale style; the second movement, Serioso, has a marvelous oboe solo and the finale is a dance that might be called worthy of Byrd or Bull. But, stylistically, this music belongs to no one other than Howard Blake. To steal a phrase from the late composer and critic Herbert Elwell, Howard Blake has shown us that “new things are still possible within the diatonic system”.

The album is titled The Barber of Neville, since Neville and Andrew Marriner --- as well as Howard Blake ----frequented the Kensington hairstyling salon of a man called Jean-Marie. Through Jean-Marie, the three men got together and planned the making of this recording. All four of them are shown in photographs in the accompanying booklet.

The Academy under Marriner (who will be 90 next year, and who has passed the symbolic baton to Joshua Bell while continuing to conduct the group from time to time), is one of the marvels of orchestral playing, having begun as a string ensemble and now greatly varied in size and scope as the repertory demands, with a core membership of about fifty to sixty musicians. It continually reveals new aspects of itself, having been heard over the last half-century plus in an unbelievable variety of repertory for ensembles of almost every size and description.