News: 'FUSIONS' AT THE RNCM BRASS BAND FESTIVAL MANCHESTER JAN 31 2023
You Are Here:-> Home :: Music :: Orchestral :: Orchestra with Projected Film (or narrator) :: THE BEAR CONCERT VERSION to be narrated or performed with projected film, girl soprano, tenor and baritone soloists and orchestra

THE BEAR CONCERT VERSION to be narrated or performed with projected film, girl soprano, tenor and baritone soloists and orchestra op.510 (April 1999)

The music and songs comprising this concert work were originally created for the animated film of 1999
Published by: Inquiries to Highbridge Music to rent music, hire film see below
Commissioned by: Original animated film commissioned by Channel 4 TV
Instrumentation: For narrator or projected film, girl soprano, tenor and baritone soloists and orchestra:  2121 211.tuba.2pc pno/cel, hp, strings

[Key to Abbreviations]
Note on Lyrics: Music and lyrics by Howard Blake, based on the animated Channel 4 film directed and story-boarded by Hilary Audus (adapted and extended from the picture book drawn by Raymond Briggs)
Duration: 26 mins
First Performance: 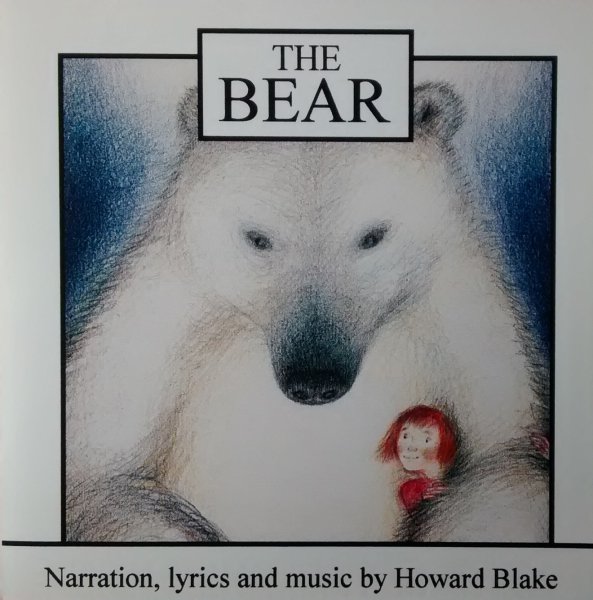 Documentary film of the making of the animated film titled 'The Bear's Tale' available from Channel 4 TV.

The animated film of 'The Bear' was made in 1997/8 by the same team that made ‘The Snowman’ , based again on a story by Raymond Briggs and first shown on Channel 4 TV on Christmas Eve 1998. It is a companion-piece to ‘The Snowman’ except that the hero is a small girl – sung on the film by Charlotte Church. The adaptation and storyboard development of the film were made by director Hilary Audus and art-director Joanne Harrison, the producer was John Coates.

THE STORY AS TOLD IN THE FILM

'A young girl, Tilly, visits the zoo with her mum and dad, but accidentally drops her best-loved toy into the polar bear's pit. That night, Tilly cries herself to sleep, only to wake and find a huge polar bear standing over her- he's come to return her precious teddy.

So begins a magical friendship with some bear-size complications, the biggest problem being how to keep such an enormous pet hidden from her parents. Everything changes when The Bear hears a call of the wild from the spirit of The Star-Bear who descends from the constellation in the sky to embark on an extraordinary night adventure across the City of London.

The Bear is represented by a tenor and the Star-Bear by a bass-baritone but all three singers join in the song ‘Somewhere a star shines for everyone’, sung as they skate down the frozen Thames.

THE BEARS' SONG
See how the Great Bear gleams
So far, far away up high,
You can see how the starry beams
Make a trail in the wintry sky.
It guides you home,
It shows you the way,
It leads you back to those whom you love,
where your heart belongs.
Just take one step and it will start you upon the journey homeward,
Clothed in a silver cloud
And following stride by stride,
Oh - swath'd in a robe of stars, and travelling side by side,
The Star-Bear will lead you safely home.

'*THE BEAR' op.496 (March 1998)
Songs and score for an animated film made for Channel 4 featuring the song 'Somewhere a star shines for everyone', sung on the film by 'discovery' Charlotte Church.

'SOMEWHERE A STAR SHINES FOR EVERYONE' op.509 (April 1999)
The song for girl soprano, tenor, baritone and orchestra from 'The Bear'